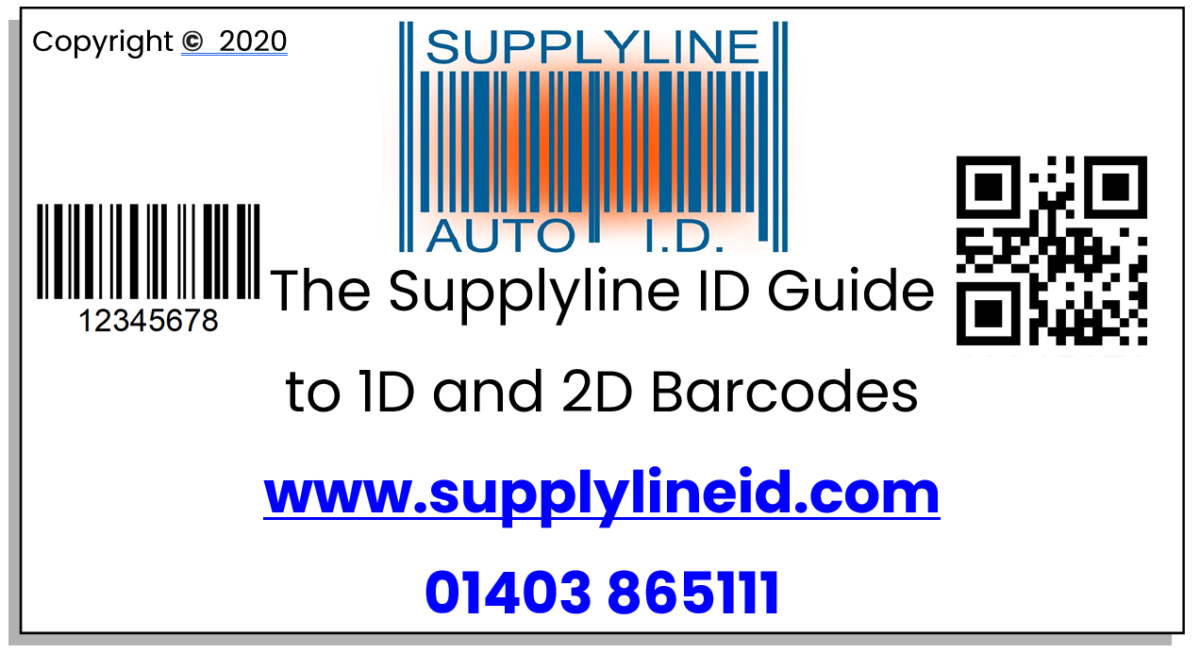 The humble barcode was officially invented and patented in 1951 based on a version of Morse code.  This was later improved under the UPC organisation for commercial use which we now know as Automatic Identification Data Capture (AIDC). Although used in some applications and industries, it wasn’t until 1974 when the very first retail product was scanned; a packet of Wrigley’s Juicy Fruit chewing gum, using an Intermec barcode scanner.

Advancements now include very widely used 2D Barcoding, the mist recognised being the QR Code (Quick Release Code).  This was initially used and designed for the automotive industry in the 1990’s allowing for reliable and efficient readability. However with the rise of smartphones and their cameras, companies soon adopted it for promoting website links, special promotions or for product/brand awareness campaigns.  Within a couple of years this has quickly become the universal symbol for scanning using your smart device.

So where do I start?  With Supplyline ID’s Quick Guide of course!

There are so many barcodes used throughout every single industry that exists, it’s difficult to know where to start and what is best for you.

Our guide to 1D and 2D barcodes should hopefully provide you with enough information on the most common barcodes, so you can make informed decisions when implementing barcodes in your workplace.  With this in mind, please contact us for expert advice or if you’re unsure about anything.  We’re happy to help!

There are even more types of barcodes out there, but these are some of the most popular formats:-

A 1D (Linear) barcode consists of parallel up and down lines that resemble a fence or ladder depending on orientation. 1D barcodes are traditionally used to encode static data that will be linked to dynamic data that changes frequently (limited to 85 characters). As the original barcode type, most customers are equipped to use 1D barcodes already and can be used in nearly all applications.

2D Barcodes can be made up by patterns of squares, dots, hexagons and other geometric patterns. While maintaining a fairly small size, these barcode types hold much more data than 1D barcodes (up to 2000 characters) and be scanned by phones and other smart devices. For speed and accuracy, 2D barcodes show a proven improvement over 1D, and is the perfect solution to proving lots of information in a compact form.

The below table outlines the character sets available for use with which barcodes. 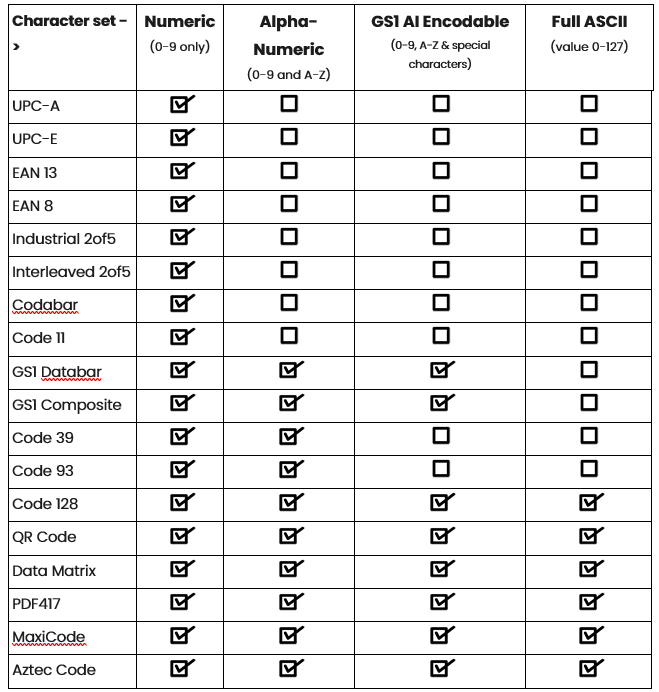 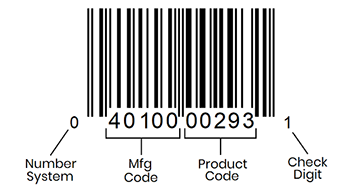 The UPC-A barcode was created by IBM in 1971, used typically in retail and warehousing and contains 12 numerical digits. The barcode contains basic information about the manufacturer’s identity and the identification number for the product, but more information can be gained by looking up UPC codes with a service such as UPC Database or GTIN, which is the official bar code assignment organization in the United States. 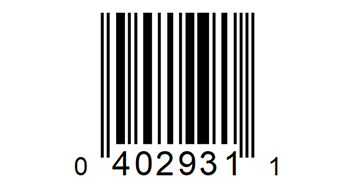 The UPC-E is a variation of the UPC-A, an eight-digit barcode in which all unnecessary zeros have been removed. This allows a more compacted barcode to be used while providing the same information.
(a UPC-E can automatically be converted into a UPC-A)
Both types of UPC labels tend to be used in a retail or warehouse environment. 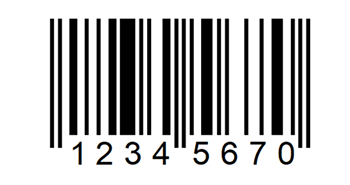 EAN-8
An EAN-8 barcode comes originally from an EAN-13 code, with it’s main intent being to use up less space than current codes. EAN-8 barcodes were introduced for use on small packages, where EAN-13 would be too large. 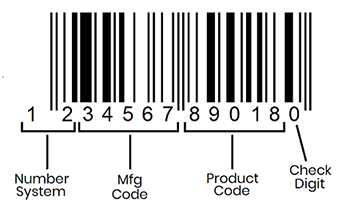 EAN-13
The most commonly used EAN standard is the thirteen-digit EAN-13, a superset of the original 12-digit Universal Product Code (UPC-A) standard. An EAN-13 number includes a 3-digit GS1 prefix (indicating country of registration or special type of product).

Industrial 2 of 5 is a low-density barcode, that was developed in the 1960s. The symbology is called “2 of 5” due to the fact that data is encoded within 5 bars, 2 of which are always approx 3x wider than the remaining three narrow bars. [as shown below]

Primarily used in photo finishing, sequential airline ticketing, and warehouse sorting, Industrial 2 of 5 is a very simple code in that all of the information is encoded into the width of the bars themselves, the white spaces are there only to separate the bars. 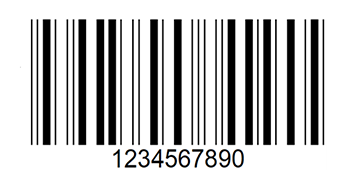 Interleaved 2 of 5 is a higher density barcode based on the original Industrial 2 of 5 symbology. Information is encoded into both the black bars and spaces in between, which means each set of 5 bars and spaces contain 2 characters instead of 1. This does limit you to only being able to use an even amount of characters. Found mainly in applications like distribution, labelling packaging and warehousing.

ITF-14 is the GS1 implementation of an Interleaved 2 of 5 (ITF) barcode to encode a Global Trade Item Number than can be read with the GS1 GEPIR tool.

The thick black border around the symbol is called the Bearer Bar. A purpose of a Bearer Bar is to enhance read-reliability by helping to reduce misreads or short scans that may occur when the scanner is held to a bar code at too large an angle. Instances of skewed scanning cause the scanning beam to enter or exit the barcode through the Bearer Bar’s top or bottom edge, forcing the scanner to detect an invalid scan.

Codabar is a linear barcode symbology developed in 1972 by Pitney Bowes Corp, that can encode up to 16 characters from 0-9, six symbols (-:.$/+) and the start/stop characters ABCDE*N and T. Itself and its variants are also known as Codeabar, AmesCode, NW-7, Monarch, Code 2 of 7, Rationalized Codabar, ANSI/AIM BC3-1995 or USD-4.

Codabar barcodes are used by (but not limited to) logistics and healthcare professionals, such as US blood banks, FedEx airbills, photolabs, libraries and more.

Code 11 is a barcode symbology developed by Intermec in 1977. It is used primarily in telecommunications due to its high density. This barcode can encode any length of data consisting of the digits 0–9 and the dash character (-) and start/stop characters. Check digits are used (C & K) to improve data integrity, however if only 10 characters or less are used, only the first check digit is used.

Code 39 is the first alpha-numeric barcode; created by Intermec in 1974. It is a variable length barcode that can utilise 43 characters, consisting of uppercase letters (A-Z), numeric digits (0-9) and special characters (-.$/+%* and space) and can be decoded with virtually any barcode reader.

The barcode does not contain a check digit but can be considered self-checking on the basis that a single misinterpreted bar can’t generate another character value. Used mainly outside of retail, due to the drawback of its low data density: meaning that very small goods often cannot be labelled using Code 39.

Code 128 is a high-density barcode symbology used for alphanumeric or numeric-only barcodes and can encode all 128 characters of ASCII. GS1-128 (formerly known as UCC/EAN-128) is a subset of Code 128 and is used extensively worldwide in shipping and packaging industries as a product identification code for the container and pallet levels in the supply chain.

Code 128 is usually preferred over code 39 in new non-POS applications like supply chain where you might need serial shipping container codes (SSCC) due to it’s larger selection of characters and ability to encode lots of data in a small space.

Barcodes in the GS1 system (e.g. GS1-128) use Application Identifiers (AI’s) to provide information about the structure of the encoded data. An Application Identifier (AI) is a prefix (consisting of 2 to 4 characters) that identifies the meaning/format of the data that follows. For example, it is possible to encode the weight of 25.47 kg with a standard barcode by simply coding the number 2547, however the application cannot distinguish if the value is a weight, time, price or something else. The Application Identifiers solves this by providing more data about the item scanned.

GS1 DataBar
GS1 DataBar, formerly known as RSS (Reduced Space Symbology), was developed by GS1 to encode item identification numbers and supplementary data, enabling them to support both current and future applications. Because they can encode a lot of data in a small area, these barcodes are often used for identifying small items, particularly in the food, retail, health care, and pharmaceutical markets.

This family of barcodes include: 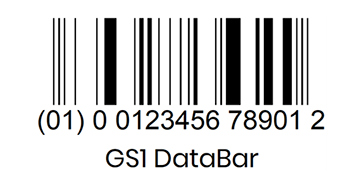 Symbols that are not intended for retail POS scanning:

Some GS1 Barcodes can encode additional GS1 Application Identifiers such as sell-by date, weight, and lot number. Each symbol has a capacity of up to 74 characters. 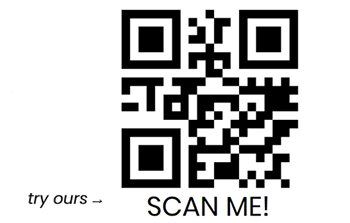 A QR code (short for “quick response” code) is a type of barcode that contains a matrix of dots or geometric shapes that contain more than 4000 alphanumeric characters
(far more than a tradition 1D barcode).

It can be scanned using a QR scanner or a smart-device with built-in camera. When scanned, the device decodes the cells into numbers or a string of characters like a URL.

PDF417 is a stacked linear barcode format (created in 1991 by Symbol) used in a variety of applications such as transport, identification cards, and inventory management. “PDF” stands for Portable Data File. The “417” signifies that each pattern in the code consists of 4 bars and spaces in a pattern that is 17 units (modules) long. 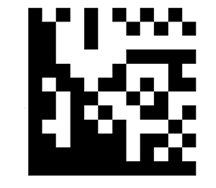 DataMatrix is another type of 2-Dimensional barcode consisting of black and white “cells” or dots arranged in either a square or rectangular pattern, also known as a matrix; and can be encoded with Alpha-Numeric data. Its ability to support advanced encoding and error checking algorithms allows recognition of barcodes that are up to 60% destroyed; making them ideal in environments where labels can get damaged due to heat/chemical exposure. 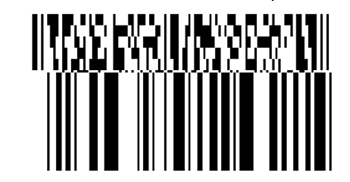 The GS1 Composite barcode incorporates both a GS1 Linear code and a 2D Composite component within a single symbology; with the 2D aspect being printed above the linear code. The 1D part encodes the item’s primary data and the 2D encodes supplementary data to the linear component. You tend to see this type of barcode in grocery stores on fresh produce labels. 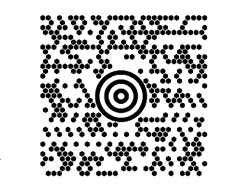 Maxicode
The 2D MaxiCode was created by UPS for use when tracking and managing the shipment of packages. It looks somewhat like a 2D matrix barcode but it uses dots arranged in a hexagonal grid instead of cells/bars. Its predominant use is on shipping labels for US domestic and international packages. 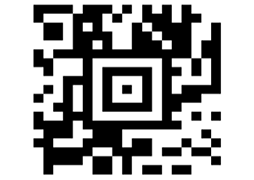 An Aztec code takes up significantly less space than other matrix barcodes due to it not having a quiet zone, this makes it an extremely effective barcode for when space is limited.
Aztec codes are popular among transport ticketing solutions.

You can download a full PDF version on the guide here.